Hit enter to search or ESC to close
Raw Materials

And that’s how another of my dreams came true: I went to Hallertau.

On 16th September, in the harvest, another of my dreams came true: I went to Hallertau, the largest hop area in the world. I still remember when I was in Venezuela and I saw every day Youtube’s videos about  Hallertau and I always thought: “Someday I’ll be there”, and that day arrived and it was just wonderful. It turns out that I did it with one of the most important experts in the area: Dr. Willy Buholzer, who kindly picked me up in Munich and then we traveled to Wolchzach, Hallertau, specifically to the “Busch Farm”. It was an unforgettable trip and I thank Mr. Buholzer enormously for all his attention and for sharing with me his passion. It took so long to write this PROST because there were so many wonderful experiences I lived there that I did not know how to summarize them and also not to lose any detail, however here it goes and I hope you like it…

First of all, I would like to explain you a little bit about what Hallertau is and what hops are so that you could have a better idea of the important role it plays in the beer industry. 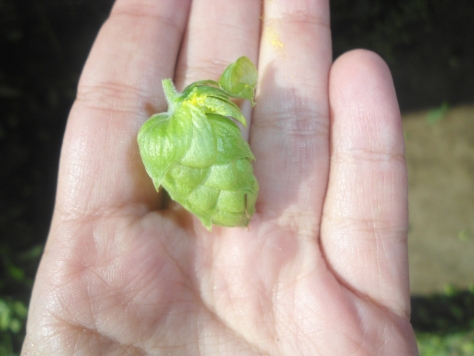 The hops belong to the family of cannabinaceas, but despite their relationship with Cannabis, commercial hops, Humulus lupulus, does not contain hallucinogenic substances. The female flowers are grown in other plants than those produced by male flowers. In addition to adding flavor to beer, hops are also used in brewing for their antibacterial effect over less desirable microorganisms and for many purported benefits, including balancing the sweetness of the malt with bitterness, contributing a variety of desirable flavors and aromas.

Hallertau is the most important hop area in Germany and in the world and has approximately 178 square kilometers of hectares, dedicated to the production of hops. Germany has three areas where hops are grown, among which area: Tettnang, Elbe-Saale, and Hallertau. Hops growers from all areas of Germany belong to the HVF (Hopfenverwertungsgenossenschaft). This association is located in Hallertau and is the largest in the world and ensures the high quality and diversity of the German hops. It is estimated that 80% of the total production of German hops is exported to approximately 100 countries. Harvesting begins at the end of the summer and you should always check for the presence of pests or diseases. It also requires a lot of experience to recognize when hops are ripe.

When we arrived in Hallertau, we first visited a factory that is in charge of processing the hop that comes directly from the field. Initially, hop cones are separated from leaves and stems. In the brewery, the female inflorescence of the plant is used, which contains the bitter resins and aromatic oils that provide bitterness and aroma to the beer.

The hops require light and hours of sunshine to make a good bloom. It is a natural distribution plant that grows well in countries like Germany or England. It is a climbing plant that grows in a spiral surrounding other plants to find the light. Therefore It is necessary to give it a support for where to climb. The more vertical growth the plant can develop, the more bloom there will be.

….First, the hops must be harvested, then go through the sorting and drying process, this step is necessary to be able to store them. Traditionally, it is performed in dryers, where hot air is passed under controlled conditions. But, it is important, to control the temperature and the speed of the air. Drying should be done as soon as possible, after harvest. When hops are collected, they have a moisture content of 75-80% and should be reduced to 10% in order to store them for a certain period of time. During the drying process, an overheating problem can occur, causing changes in coloration and loss of acid alpha, which are extremely necessary for the brewing process.

The drying method using only warm air is 100% German and it is implemented to guarantee the fine aroma. The best thing is that the others hop areas in the world are now also using it.

One hectare of hops requires about 220 hours of work per year, therefore it is a saying: “The hops want to see its grower every day”

Once the hops have dried, it can be processed in the following presentations:

And so it is sent to different customers. The Busch Farm is responsible for producing all the hops for the largest brewery in the world, Anheuser-Busch. This farm is the result of an arduous family work, of which Dr. Willy is the heir. He started at the age of 6 when he accompanied his father on trips to the hops areas and even remembered when he climbed on the hops bales. He always wanted to follow in the footsteps of his father and confesses that he was born with that passion. On vacation, he worked in the world’s largest hop areas even though he was still at school. And in 1988 his Farm was bought by ABInBev. Today, he is in charge of buying the hops for all breweries belonging to ABInBEV.

When I asked him about some advice in the area, his words were: ” There are only a few places that can produce hops, but no one can make beer without hops; therefore it implies a constant global interaction and you get to meet many interesting people in this way”.

But the most incredible thing is, the farm is located next to the world’s largest hop research institute: Hüll Institute. There we were also attended by Dr. Elisabeth Seigner, who gave us a detailed and exhaustive explanation of all the varieties that the institute has, as well as the various diseases that may be present in the plant. Eight are the main types of hops the institute counts today with, among of these are: Mandarina Bavaria, Huell Melon, Hallertau Blanc, Polaris, Herkules, Saphir, Ariana and Callista; the last two are the most recent varieties and possess all the characteristics that brewers suppliers are looking for: great resistance at the level of cultivation, as well as a unique scale of aromas that allow to produce different profiles of brewing flavors. I had the opportunity with Dr. Willy to make a sensorial analysis of some of the hops that were in the table, we could perceive notes of passionfruit in Callista hops and notes of grapefruit in Ariana. It is important taking into account, for a new variety to appear in the market, it takes approximately 20 years or more because it only comes to the market when it meets the high-quality standards that characterize German hops. Not only is this institute responsible for producing new varieties and for controlling the quality of hops that are dispatched to suppliers, but also for controlling the diseases and pests that can affect hops. They are responsible for the cultivation of healthy plants, therefore requires both a laboratory analysis and field tests.

The main diseases that hops can get are:

It is the most important pest that attacks hops. The hive aphid has a light green color with dark stripes. The aphid reproduces very quickly, so that in a short time a dense colonization develops. Due to the suction of the flowers, the fruit and the leaves, the plant is notoriously deteriorated.

The red spider causes damage by suction, from there appear yellow to brown colorations on the upper part of the leaves. The propagation occurs through eggs. A warm and dry climate favors its development. The attack begins on the lower leaves of the plant. The spider population then moves rapidly upwards. Depending on the type of hops, there are more or less yellow spots on the leaves.

In addition to the aphid and red spider, there are many other insects that can be found in the hop plants. Some of them may be considered minor pests. Such insects live in and of the plants, but usually do not produce any damage.

And some general culture…

“Der Maibaum” or the Tree of May. It is a bare tree of great height, that is usually placed the day of the worker in the main squares of the municipalities. It presents blue and white colors in allusion to the Bavarian flag. It is a Bavarian tradition and no anyone can have their own tree. But the Busch Farm has it‘s own and of course, I just had to take a photo.

And here I give you some tips:

1. One of the most important rules for brewing beer is to take care of the intake of oxygen.

2. What is the beer gushing ?. It is the jet stream of beer and the sudden overflow of foam when a bottle is opening.

3. As a brewer, it is always important to supervise the whole and make the right decisions, the smaller visual inspection of the product, to give special importance to the ample knowledge of the brewers.

THANKS, THANKS, AND THANKS FOR ALL OF THIS TO ALL OF YOU.

THANKS TO WILLY BUHOLZER, THANKS TO ABINBEV, THANKS TO MY FRIEND IN MUNICH WHERE I SLEPT  AND THANKS TO GERMANY